The Norton Simon Museum has contributed approximately 1,060 images of their permanent collection to the Artstor Digital Library. The selection in Artstor reflects the quality of the collection, notable for European and American paintings and the art of South and Southeast Asia.

In 1974, the Norton Simon Museum originated when a remarkable private art collection and the pre-existing Pasadena Art Museum (PAM) merged. The industrialist Norton Simon’s passion for European and Asian art provided a selection of outstanding quality—paintings, sculptures and works on paper—that complemented the holdings of the Museum, German Expressionist and modern art, in a composite yet coherent collection that currently includes more than 12,000 works.

Over a thirty-year period, Norton Simon (1907-1993) amassed an astonishing selection of European art from the Renaissance through the 20th century and a stellar collection of South and Southeast Asian art spanning 2,500 years (for a total of several thousand works). Among the most recognized paintings are Raphael’s Madonna and Child with Book, c. 1502-03; Francisco de Zurbarán’s Still Life, 1633; Rembrandt’s Portrait of a Boy, c. 1655-56; and Van Gogh’s the Mulberry Tree, 1889. Highlights from the Asian collection include the bronze sculptures Buddha Shakyamuni, c. 550, Bihar, India, Gupta period; Shiva as Lord of Dance, c. 1000, Tamil Nadu, India; and the gilt bronze Indra, 13th century, Nepal. 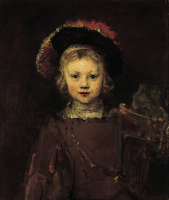