Harvard University has contributed nearly 4,000 images of Renaissance and Baroque architecture and sculpture photographed by Ralph Lieberman to the Artstor Digital Library.

The selection targets the celebrated architecture and sculpture of Italy, chiefly Venice, Florence and Rome. Lieberman’s perspective as an art/architectural historian— providing varied and well-framed views —  and the high quality of the images lend them especially well to study. They have been selected from the Ralph Lieberman Photograph Collection, which is housed at the Harvard Fine Arts Library and consists of thousands black-and-white prints and negatives.

Ralph Lieberman, Fulbright, Kress, and Villa I Tatti scholar, has taught at Williams College, Harvard University, and the Rhode Island School of Design with a specialization in the Renaissance and Michelangelo, and the relationship between photography and art history. He began photographing buildings while completing his Ph.D. at the Institute of Fine Arts. He supplied photographs for his own publications, chief among them Renaissance Architecture in Venice, 1982, and The Church of Santa Maria dei Miracoli in Venice, 1986. Lieberman has also provided illustrations for other scholars’ work, notably Claudia Lazzaro’s The Italian Renaissance Garden, 1990, Leon Satkowski’s Giorgio Vasari: Architect and Courtier,1993, and Eugene J. Johnson and Michael J. Lewis’s Drawn from the Source: The Travel Sketches of Louis I. Kahn, 1996. Lieberman’s photographs may be found in art historical study collections at the National Gallery of Art in Washington, DC and the Frick Art Reference Library, in addition to Harvard. 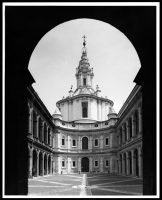