Northwestern University has contributed more than 250 images taken from the sixteenth-century anatomical illustrations of Andreas Vesalius.

Vesalius (1514-1564) was an anatomist, physician, and the author of a pioneering treatise on human anatomy, De Humani Corporis Fabrica. First published in 1543 (revised in 1555), the Fabrica is a meticulously illustrated atlas of the human body, informed by Vesalius’ experience with autopsies and dissection. This approach marked a shift in medical education away from a reliance on ancient authorities like Galen towards direct observation. While the artist who produced the Fabrica‘s woodcuts is unknown, they are masterpieces of Renaissance printmaking. Further, these images became the basis of medical art and illustration for generations, and transformed attitudes and perceptions of the human body throughout the Western world.

Two scholars at Northwestern University — Daniel Garrison, Professor of Classics and Malcolm Hast, Professor Emeritus of Otolaryngology — completed the first English translation of the Fabrica (The Fabric of the Human Body: An Annotated Translation of the 1543 and 1555 Editions of De Humani Corporis Fabrica Libri Septem). As part of the project, digital scans of the diagrams and anatomical illustrations were produced from a facsimile of the 1543 edition. [Sadly, the original wood blocks were destroyed during the Allied bombing of Munich in 1943.] Over 200 images, depicting individual bones and organs, entire systems, and the famous “muscle men” posing dramatically against Renaissance landscapes, are available in Artstor. These images are accompanied by scholarly information, including modern anatomical names for all parts mentioned in the original Latin text, also contributed by Garrison and Hast. 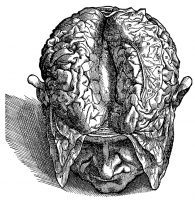