Blog Category: On this day

On this day: Valentine’s Day

February 14 is Valentine’s Day! Of course you know it’s the day in which you are supposed to express love for your sweetheart with flowers, candy, or greeting cards. And you probably know that it’s purportedly a holiday to honor an early Christian saint named Valentine. But did you know that there was more than one Saint Valentine? Valentine’s Day honors two martyrs: Valentine of Rome, a priest, and Valentine of Terni, a bishop. Maybe most surprising is that neither of them had much to do with romance. In the 13th century, Jacobus de Voragine’s The Golden Legend reported that St. Valentine (without clarifying which one) was executed after refuting Roman Emperor Claudius II’s attempts to convert him to paganism. Over time, the story was embellished to specify that Valentine’s arrest and execution resulted from performing Christian marriage ceremonies against Claudius’s edict. 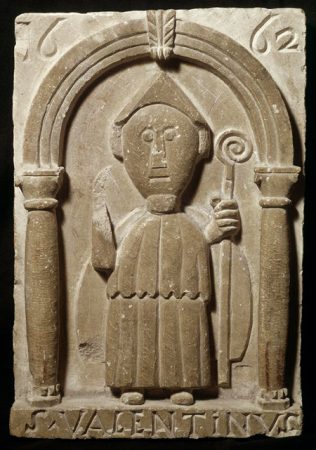 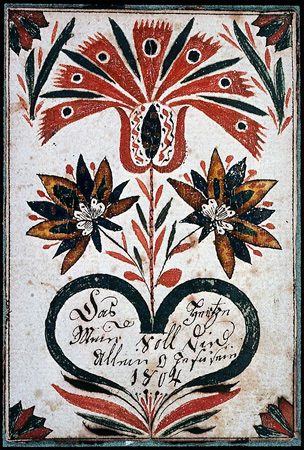 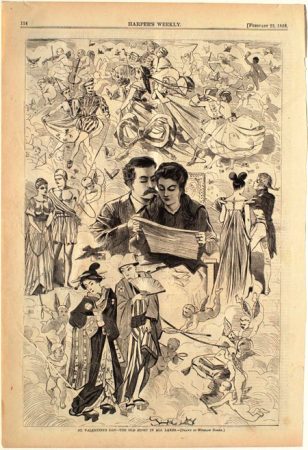 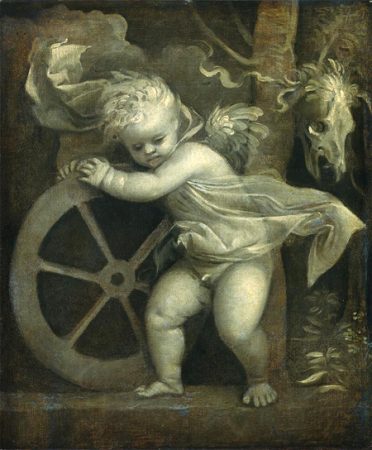 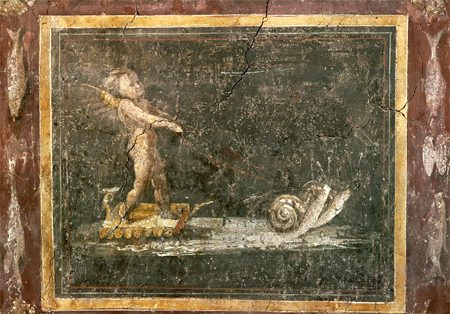 We don’t see many images of St. Valentine on his holiday, possibly because martyrdom won’t put your sweetheart in a romantic mood (though you’re welcome to test it out by showing them the 15th century woodcut from The Illustrated Bartsch above). Instead, in addition to hearts, we often see images of cupid, the god of desire, affection, and erotic love from Roman mythology. Cupid was a popular motif in Medieval and Renaissance art, and a keyword search in the Artstor Digital Library results in more than 1,000 images. The whimsical image included in our slide show of “Cupid on a Wagon Drawn by Snails” by the workshop of Raphael (from Italian and other European Art (Scala Archives)) seems to encourage love to move slowly, while Titian’s contemporaneous “Cupid with the Wheel of Fortune” (from the National Gallery of Art ) strikes a gloomy note, capturing the downside of the vagaries of romance. More happily, Winslow Homer’s illustration from Harper’s Weekly (courtesy of the Sterling and Francine Clark Art Institute Collection), rife with cupids, reminds us that love transcends all eras and cultures.

We wish you a happy Valentine’s Day with a lovely watercolor of a heart that reads “My heart shall be thine alone,” courtesy of an anonymous romantic (from the Museum of Fine Arts, Boston). The Reverend Martin Luther King, Jr. was a pivotal figure in the African-American Civil Rights Movement. Among his many achievements, King led the 1955 Montgomery Bus Boycott that ended racial segregation on all Montgomery public buses; planned the drives in Alabama for the registration of African-Americans as voters; and directed the 1963 march on Washington of 250,000 people, to whom he delivered his “I Have a Dream” speech from the steps of the Lincoln Memorial, calling for racial equality and an end to discrimination.

King was named Man of the Year by Time magazine in 1963, and the following year he became the youngest person (at the age of thirty-five) to receive the Nobel Peace Prize for his work to end racial segregation and discrimination through nonviolent means. King was assassinated on April 4, 1968 while standing on the balcony of his motel room in Memphis, Tennessee as he readied to lead a protest march in sympathy with the city’s striking garbage workers.

Martin Luther King, Jr. Day was established as a U.S. federal holiday in 1986. It is observed on the third Monday of January each year, near King’s birthday, January 15.

A search for Martin Luther King leads to hundreds of images in the Artstor Digital Library, most notably dozens of photographs of King from Magnum Photos, including marches and speeches in Georgia, Alabama, Maryland, and Washington, DC. You will also find images of the Martin Luther King, Jr. Memorial in Washington from the Contemporary Architecture, Urban Design, and Public Art (ART on FILE Collection).

On this day: Happy Chinese New Year – Year of the Dragon!

The Year of the Dragon begins January 23rd, marking the end of the winter season. The traditional Chinese calendar is based on a combination of lunar and solar movements; the year begins with the night of the first new moon of the lunar New Year and ends on the 15th day. This year is signified by the dragon, the bringer of rain and good luck, and the only mythical animal in the Chinese zodiac. The Chinese New Year is a time for family unity and reconciliation. Chinese families gather on New Year’s Eve for a feast to celebrate harmony and honor the spirits of ancestors. Other traditions include cleaning the house to sweep away bad luck and make way for good luck, decorating windows and doors with red cut paper decorations, and giving family children money in red paper envelopes (red, corresponding with fire, symbolizes happiness and good fortune). The last day is celebrated with the Lantern Festival, a tradition that includes hanging lanterns outside each house to help the dead find their way home. Li Shida, New Year’s Day in a Village at Stone Lake, 1609. Data from: The Cleveland Museum of Art

The images illustrating this post include a woodblock print of Zhong Kui, the Demon Queller, called “Great Luck in the New Year,” from the Asian Art Photographic Distribution (AAPD) (University of Michigan), and a 17th century painting of New Year’s Day in a village by Li Shida and a calligraphic 15th century painting greeting the New Year by Shi Rui, both from the Cleveland Museum of Art. For more information on the ARTstor Digital Library’s extensive collections of Chinese art, architecture, and culture, view our ARTstor Is… Asian Studies post.

On this day: Happy birthday to Mayor Ed Koch! Mayor Koch recently posed for this portrait, which is now included in the Catalog of American Portraits maintained by The National Portrait Gallery. View more of Dmitry Borsch’s work in the ARTstor Digital Library.

On this day: Louis-Jacques-Mandé Daguerre is born Louis-Jacques-Mandé Daguerre, widely known as the father of photography, was born on November 18, 1787, France. Dauguerre, also a painter and theatrical designer, was already a celebrated figure for his invention of the Diorama, a spectacle featuring in-the-round theatrical painting and lighting effects. He eventually partnered with Joseph Nicéphore Niépce to make lasting images using light and chemistry. Niépce had produced the world’s first permanent photograph, but the result was extremely fragile and required an eight-hour exposure. It was not until 1839, six years after Niépce’s death, that Daguerre was able to announce the perfection of the daguerreotype, a relatively permanent, one-of-a-kind photographic image made on a silver-coated sheet of copper exposed to iodine, developed in heated mercury fumes, and fixed with salt water. That same year, the patent for the daguerreotype was acquired by the French Government, which pronounced the invention a gift “Free to the World.”

Search for “Louis-Jacques-Mandé Daguerre” as creator in the Digital Library’s Advanced Search to find many samples of his surviving daguerreotypes, as well as paintings and a drawing of his Diorama, or search for daguerreotype to see dozens of images of photographs created using Daguerre’s method. On this day: The Gettysburg Address On November 19, 1863, President Abraham Lincoln delivered a brief, powerful speech at the dedication of the military cemetery at Gettysburg, Pennsylvania. He addressed the country’s civil war, reminding weary Americans of the values they were fighting for. Its closing words were: “It is rather for us to be here dedicated to the great task remaining before us – that from these honored dead we take increased devotion – that we here highly resolve that these dead shall not have died in vain – that this nation, under God, shall have a new birth of freedom – and that government of the people, by the people, for the people, shall not perish from the earth.” The Gettsyburg Address is now inscribed in the Lincoln Memorial in Washington, D.C.

A simple search for Abraham Lincoln in the Artstor Digital Library will result in hundreds of photographs, sculptures, murals, and political cartoons of the American President from collections as varied as The Metropolitan Museum of Art, The Carnegie Arts of the United States Collection, The Brooklyn Museum Costume Collection at The Metropolitan Museum of Art, and George Eastman House. Search using the terms Lincoln and Gettysburg to see vibrant images by folk artists William H. Johnson and Malcah Zeldis.

On this day: Armistice Day Many countries throughout the world celebrate Armistice Day on November 11 to commemorate the effective end of World War I on the “eleventh hour of the eleventh day of the eleventh month” of 1918. A common custom dictates a two-minute moment of silence at 11:00 AM as a sign of respect for those lost in the war.

In 1938, November 11 became an official national holiday in the United States to pay tribute to all American veterans. After World War II, the name of the holiday became Veterans Day in the United States and Remembrance Day in countries of the British Commonwealth of Nations, which began to hold most Armistice Day events on the nearest Sunday to commemorate both World Wars. It retains its name in nations such as France and Belgium.

The George Benjamin Luks painting illustrating this post comes from Carnegie Arts of the United States, and the uniforms from the The Metropolitan Museum of Art: Brooklyn Museum Costumes. Other pertinent collections in the ARTstor Digital Library include World War I and II Posters and Postcards (University of Minnesota Libraries); The Schlesinger History of Women in America Collection; and George Eastman House. Tip: narrow your searches by date to 1914 to 1918 to find World War I-era images.

Posted in
On this day
‹ Previous1234
RSS